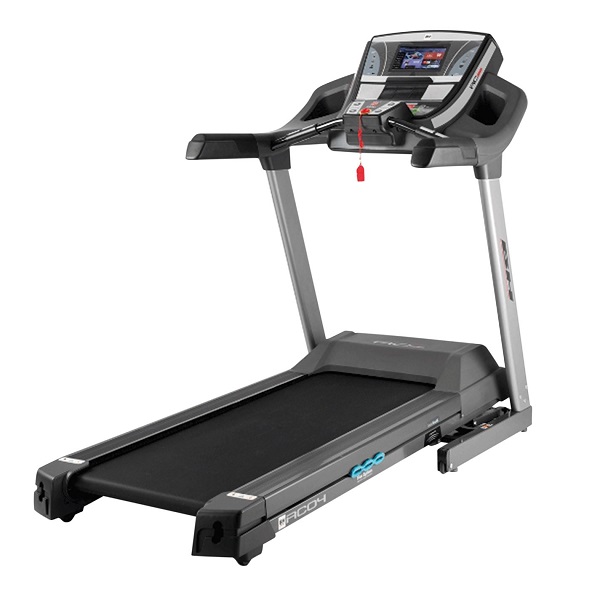 BH Fitness is one of the world’s largest fitness manufactures that has been designing and manufacturing fitness machines since the 1960′s. They have a good reputation for building reliable, quality machines. In the last few years, their presence in the home fitness market (they also manufacture commercial fitness equipment) in the UK has assumed a somewhat lower profile but they continue to serve the market here and are still one of the more recognisable brands out there. The BH RC04 TFT treadmill is a machine that looks pretty good on paper so we got one in to see how it looks a bit closer up……..

Assembly requires two people but is simple enough that even if you’re not good at flat-packed things, it won’t give you any trouble. With a footprint of 184cm x 94cm  (72.4’’ x 37’’) and a height of 151cm (59.4’’) this is a stocky looking and quite imposing treadmill but a quick shake test shows that there’s a fair bit of movement around the console which is the result of a lack of a stabilising crossbar between the two uprights. This is common enough but a lot of manufacturers are realising that putting a crossbar in makes their machines feel much more sturdy.

The 140cm x  51cm (55″ x 20″) running area is large enough to provide plenty of room to move around on and while the length of the deck might be a bit shorter than many of its direct competitors, the width it provides is a bit more than can often be found on machines at this price. The cushioning on the deck is really effective and provides excellent impact absorption as well as a nice firm surface to launch from. It’s well balanced and delivers a comfortable run. We shouldn’t be surprised by this as BH is very much a member of the old guard and indeed has such experience and know-how that if the deck didn’t feel like this, we’d consider it very disappointing.

With a top speed of 20kph (12.43mph) and an incline with 12 levels the RC04 is more than capable of giving just about anyone a seriously challenging run. Even if you regularly participate in events, this treadmill will still push and punish you so there’s little chance of ever needing to upgrade later to keep up with your improving fitness levels. The 2.25 continuous duty motor is nice and quiet and doesn’t appear to struggle or whine regardless of the speed and incline settings. Even with more generously proportioned testing team members putting it through its paces it just got on with the job without complaint. The whole running experience is a good one but that being said, it’s nothing we haven’t experienced on many treadmills at around half the price, such is the nature of the market today which is full of quality machines at the mid-price point. The only niggle we really picked up on is the fact that there’s a fair amount of console movement which we’d expect to see on less expensive models but not necessarily on one at this price.

The console has a good number of features and is essentially split into two with a smaller panel housing the basic function keys (start/stop, speed, incline) that’s set closer to the runner for ease of controlling the machine during a run. It’s a system we’ve seen elsewhere and it definitely works well. On the main body of the console, there’s an array of buttons including quick access keys for speed and incline that allow you to select a setting with a single press. The centrepiece of the console is a 9″ TFT touch screen that’s nice and easy to use. There are some useful functions like being able to switch between kilometres and miles, and the way that you can create your own programme is superior to most of what we’ve seen before in terms of speed and ease with which you can do this. One feature that we particularly enjoyed was the ‘navigation mode’ which lets you choose a video to play while you’re running. The videos take you through a run in the real world so you can run along a beach, or up a mountainside. It’s quite fun and entertaining, though it’s just a video and there’s no personal trainer egging you on. In terms of programmes, there are 36 to choose from which should be more than enough to keep one busy for a while! These feature heart rate control workouts and also a body fat test. There’s plenty here to keep you busy and it all works smoothly. The only real complaint we’ve got here is that aesthetically the whole console unit looks a bit like something from the 90’s or early 2000’s.

Other goodies include being able to surf the internet, the ability to connect to a TV to display the running videos, a USB port so you can plug in your own media and a 3.5mm audio jack so you can connect your music player. There’s also a cooling fan which does a decent job and stereo speakers which, as you may already know, aren’t up to much – but they never are on treadmills.

All in all, this is a nice little package that has few niggles. There’s a bit too much movement in the console for our liking which is a shame as it’s an easy thing to resolve by including a crossbar between the two posts. The workout videos are fun, but when compared to their competitors fall somewhat flat as they fail to engage you in the same way as being guided through the video by a personal trainer. These things in their own right aren’t really an issue. But for this price, we were hoping to see just a little bit more oomph, and we didn’t get it.

The BH RC04 TFT is not currently available from any retailers we're aware of in the UK.
It may be worth looking for a used machine on ebay

Not bad, but not great considering the price is our verdict on the BH RC04 TFT treadmill. It's built reasonably well and delivers a comfortable run. The thing is that we can say the very same thing about lots and lots and lots of treadmills that cost about the same. But there are bits that let it down like the relatively small running deck and the shaky console so there's better out there for the same sort of money. 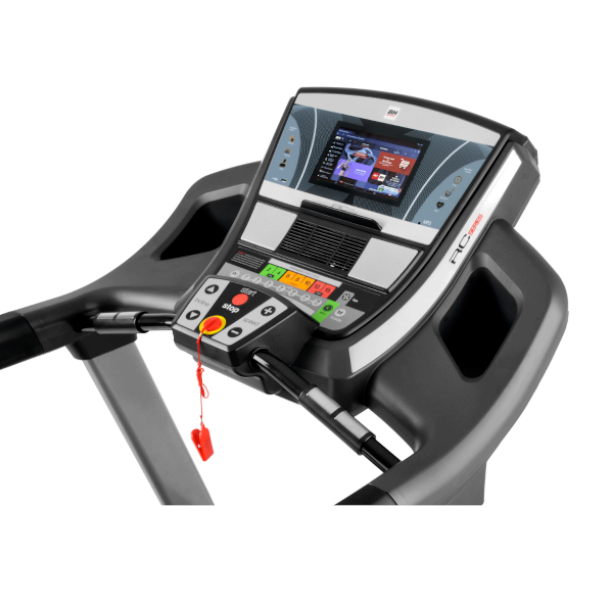 The BH RC04 TFT is not currently available from any retailers we're aware of in the UK.
It may be worth looking for a used machine on ebay