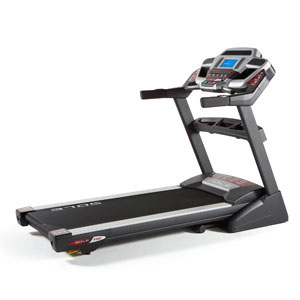 When the previous F80 model was released in 2011, it went on to scoop up various ‘best buy’ awards from leading experts; so too did the next machine in the range – the more expensive F85 model. During our latest testing of the F85, we were very impressed by the new machine overall, as well as the upgrades made to it by Sole fitness in their pursuit for continued improvements. So let’s see how the F80 compares with its bigger brother.

Before all of that, we had to get the big F80 up and running. Assembling this 120kg box of bits is obviously no light task, but thankfully (aside from the sheer weight) the lower part of the treadmill (motor/deck etc) comes pre-assembled, making the toughest challenge being getting the thing out the box in the first place! Once in situ, the instruction manual displays an 8-step assembly process to attach the side supports and console etc. Instead of taking a greater number of more manageable baby steps, Sole have tried to pack a lot of instructions into each one of the 8 procedures, which makes it a bit more taxing on the brain. For the less capable and confident person, the rather comprehensive chunk of text with each step may appear a little overwhelming, especially due to the accompanying, fiddly black and white drawings. However, although the images are a little vague and small to see clearly, it is fairly logical with numbers and if you carefully READ the text instructions (instead of trying to ‘wing’ it!) then the machines goes together without too much hassle. The main thing to be aware of when installing a big machine like this is 1. Get some help – this is a two person procedure! 2. READ & follow the instructions fully as you go. Or for the less frugal and DIY savvy then: 3. Pay for it to be professionally installed and assembled!

Once built, the F80 looks like it would be well suited in a commercial health club! It has an impressively large and bright console, chunky framework and a large deck. The overall impression would make you believe this was a machine costing over £2K. If we would criticise anything, it’s the abundance of instructional decals in places. We personally think that stickers can cheapen the looks, besides which, we would reckon that most users would refer to the manual anyway. The stickers may be great for a demonstration model in a showroom, but we are not sure why Sole would cover most of the motor hood in one going into a home setting.

Fortunately, the stickers are just a minor niggle, the overall construction of the F80 is a real pleaser! It’s so substantial that it has a maximum user capacity of 26 and a half stone, making it an ideal choice for heavier users (in fact, we are struggling to think of any other similarly priced treadmill that can claim such a capacity?!). If you’re tipping the scales over that maximum, we’d probably point you in the direction of the slightly beefier F85 which has a 28.5 stone threshold and a more powerful motor (4 CHP).

The F80’s impressive weight capacity is also coupled with a seriously powerful motor. Under the hood, is a 3.5 Continuous Horse Power Motor that drives the top end speed of 12 mph. We were very impressed by the power of the unit as well as how quietly it performed. One slight niggle we found was the slightly lethargic time it took for the motor to speed or slow down (the same was found with the incline motor too), but this is only really an issue when interval training which relies on swift speed transitions.

Enough grumbling, we must give the F80 it’s dues – it’s a joy to run on! For starters, the running area is arguably the largest we have seen on any machine at this price and beyond! It’s a whopping 60” in length by 22” in width (that’s a couple of inches wider than the competition and it’s noticeable!). What these generous measurements mean in real terms is that you get a completely unrestricted feeling of freedom as you stride out whereby you can completely focus on your workout rather than where the sides or rear of the belt stops!

The belt itself is 1.6mm thick, so, unfortunately, you’re not getting orthopaedic quality, but the cushioning system gives ample shock absorption and joint protection to make your sessions fairly comfortable underfoot. To test the cushioning system we ensured our heaviest reviewer (Charlie Rawes – 18stone) took baby elephant steps to thoroughly pound the 18 mm deck with every stride! Yet despite the punishment dished out to it, it showed no sign of distress (and neither did Charlie’s joints!)

There are 15 levels of incline which share the same convenient methods of adjustment as the speed. If you which to hold on to the side handles while walking, then there are thumb controls on each (incline arrows on the left, speed is on the right). Traditionally there are the usual up and down arrows on the console too as well as one-touch, ‘quick key’ buttons at either side of the display screen.

The screen itself is a decent sized 7.5”. This isn’t a flashy touch screen like some Nordic Track machines, nor does it have the fancier display gauges of the bigger Sole F85, but this is certainly cheaper and by no means disappoints. The vibrant blue backlighting makes the white LCD ¼ mile track and dot matrix profiles within it, clearly stand out and all other important data is well positioned in their dedicated areas. The ¼ track, which occupies the centre of the display, shows your progress in terms of laps. The oval track surrounds the dot matrix which displays the profile in columns of dots. By pressing the enter button you can see your speed profile, or click again and see your incline profile.

Similarly to the more expensive F85, this model has 10 programs with each having a dedicated button across the console for easy selection. The buttons are well laid out and labeled with their respective functions so navigation and selections are made quickly and easily as you soon get familiar with the order of things. Also we rather like the fact that they are ‘proper’ tactile buttons, rather than many models which opt for a sleeker (but perhaps less durable) overlay.

In a comparison table with other machines at this price point, ‘Only’ 10 programs may not look particularly generous, however, as you get to use the F80, you see that every one of the programs can be user-defined. In practice, this means that the variations possible when altering the times and maximum intensities on each, make for a much broader menu than would first appear. Of course, you can stick to the default presets and ‘quick start’ any session but it’s great to have the option of personally tweaking the workouts to suit yourself. Also, the user can input personal data (Age and weight) to get more accurate calorie consumption readings.

We are big advocates of heart rate controlled training, so it’s good to see there are 2 programs on offer here. Better yet, Sole are now including a complimentary, compatible chest strap transmitter so that you can link wirelessly to the inbuilt receiver. This is great news in terms of a ‘bonus’ as well as the fact that the chest strap will always provide much more accurate heart rate readings than the pulse grip sensors on the handlebars ever could.

There is further scope for new challenges by 2 user-defined programs which can be completely customised by the user/users and stored under their names!

‘Extra‘ features are rather basic, but there are a few nice ‘creature comforts’ on board to enhance the user’s workout experience. There is an input on the console to hook up your iPod or Mp3 player and listen to your favourite music through the integrated speaker system. The sound quality is fairly passable for such small speakers and although it’s not a hi-fi replacement, it’s certainly a welcome feature for making the time fly by while working out. Alternatively, there’s headphone jack, which means you won’t be disturbing the rest of the household if they don’t share your taste in music! At the top of the console is a cooling fan that can be turned on to blow a light stream of air at the face while training. So often on treadmills, a small 4” fan is so underpowered that it seems rather futile, but here Sole have put 2 fans side by side to double up the blower and make it rather pleasant!

Technology-wise, it’s true to say that up against the likes of similarly priced machines such as DKN, Reebok or Nordic Track, there may not be the USB and SD connection or iFit live features, neither does it have the amount of programs on spec by comparison either, but for those users who aren’t concerned with the latest technological advancements in fitness Motivation, then the F80 has a lot to offer in other areas. If you want a sound investment for your money then in terms of a durable machine with outstanding build quality backed up by a superb warranty, the Sole F80 is very good indeed.

The F80 from Sole is a serious treadmill for serious runners and is built like a tank. It's got a great warranty for peace of mind and you can't go far wrong if all you want to do is run. The question is: why would you buy the Sole F80 when you can get the flagship Sole F85 for the same price? 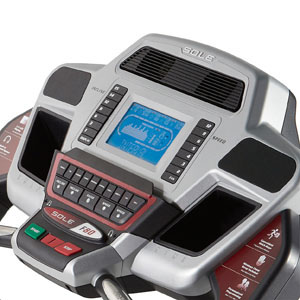